For the channel website, I have been tasked with the creation of the actual video display page. This will need to include a way of browsing the available videos, as well as a way of watching them. I intend to serve the video content using the HTML5 native video capabilities, using the appropriate file formats to ensure maximal cross-browser compatibility. I also plan to incorporate, rather than a static video player page for every video, a way of dynamically switching the video being played in the player. I will most likely create this using PHP.

I have set myself three main goals for this page, and for the website in general. These are:

If I can achieve these goals, I feel I will have created a successful product to fit this project.

Today marks the beginning of our next major group project. The task this time is to create a video channel website and a few short videos based around a ‘Design-Fiction’ theme set in the future. Several general areas/themes for the channel were suggested, including the likes of health, travel and politics, and my group gathered to discuss the brief and decided to go down the health route.

We began throwing ideas around the group, and came up with several possible concepts. The one that we stuck with and began to develop was the idea of reporting on a range of pills that give the user temporarily enhanced powers or attributes. We proposed that this new invention would be aimed at the military, police etc. and that we would be covering it from a neutral standpoint – focussing on both the positives and negatives of the product rather than a purely promotional campaign.

After further work, we decided that the traditional idea of a pill was too strict and closed, in the sense that it’s not really open to interpretation or significant design elements. We elected to change the basis of the product we were reporting on to a drink. With this, and working on feedback we had received, we also decided to drop the critique elements and produce a series of advertisements for the product.  The plan is to produce a separate video for several different drinks that boost differing attributes, such as speed or strength.

We had our idea, then, and therefore needed to come up with the branding for the channel. Since the channel was promotional by nature, it made sense that it was the drink manufacturer itself making the videos, so what we began work on was a name and logo based around that.

The name we chose was ‘Vitalise’. We felt this suited the company as it suggests self-betterment by using the products, and it tied in well with the idea of gaining a temporary ‘power-up’.

Our logo ideas mainly focussed on showcasing the drink product in some way, in varying different shapes and styles. I personally produced a sheet of a few different logo ideas, one of which was ultimately chosen to be our final logo. 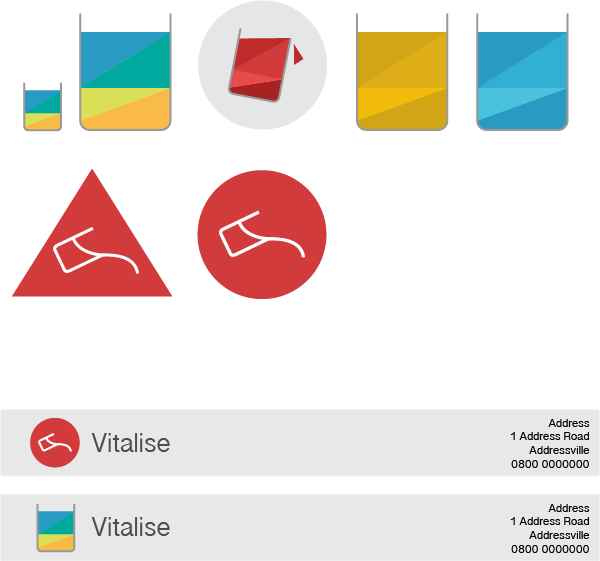 The range of logos I personally designed for Vitalise.

The final logo chosen was the red circle with the white line drawing of liquid being poured. We chose this logo as it is simple and professional looking, and can easily be scaled to various different sizes to suit different purposes such as video overlays, bottle labels, t-shirt designs etcetera. It also only makes use of two colours, so possible printing costs wouldn’t be as high as if more colours were used.

The foundations are now set for this project. The next stage is planning the video content and the channel website, and then continuing on from there.

I’m looking forward to it.