After coming up with our initial poster ideas previously, we met up again and decided to redo our design. The puzzle / separated island theme we were going with was, on reflection, perhaps a bit complicated so we decided to simplify the poster so as to make it more easily understandable. To this effect we designed around the ideas of a simple colour pallet, and big, bold easily-readable slogans. We had a think about the demographic we would be aiming the poster at in the foyer – mostly students, and thought this was probably a good approach so that the design would be kept modern and appealing. To further appeal to this demographic, we decided upon using a ‘hashtag’ for the slogan, as this firmly aims the poster at a younger generation while also providing the possibility for greater sharing of the campaign represented by the poster via social media.

For the imagery of the posters we thought it important to represent actual Dorset landmarks and features. Initially we came up with a largely green poster that portrayed Durdle Door – a prominent natural landmark on the Dorset coast. The idea of this design was, similarly to our plans with the old ‘puzzle map’ concept, to highlight the natural beauty of Dorset and the comparatively urbanised ‘grey’ nature of the rest of the UK. We tried a range of phrases for the poster before settling on ‘The UK is grey. Say yes and stay green’. We feel this line sends both the message about nature and preserving it in Dorset and also the fact that people need to actively vote (‘say yes’). For our main social media hook / slogan we went with #FREEDORSET. This is quite a striking, to-the-point expression that we hope will draw curiosity and attention towards the poster.

We then thought we’d do another poster, as if there would be a range of posters in the same range promoting the cause. We tied the posters together with the ‘free Dorset’ hashtag displayed prominently at the bottom. For the second design we decided to continue the tactic of promoting the concept of Dorset independence through presenting negative ideas of the UK – perhaps a controversial approach, but one we thought would work effectively. We also tied in both a nautical theme for Dorset’s coastal position, and another Dorset landmark – this time the Portland Bill lighthouse. We coloured this poster in shades of blue, with imagery of a sinking ship (representing the UK) and the lighthouse in the background giving an idea of hope for Dorset. The phrase we decided on to accompany the main hashtag is ‘The UK is a sinking ship. Vote to stay afloat’. This again provides a call to action for the audience to actually go and vote, as well as providing a favourable comparison of Dorset to the UK. 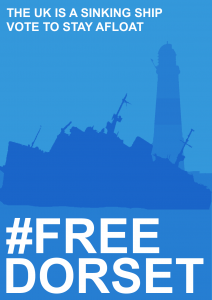 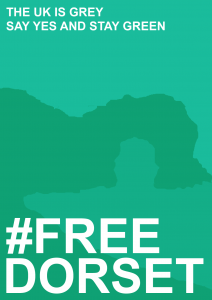 We hope to get feedback on these new designs today, so that we can make any beneficial changes before putting the posters up next week.