OpenCV, short for Open Source Computer Vision, is a programming library intended for real-time computer vision, a field which revolves around capturing, processing, analysing and understanding images with the aim of producing information. OpenCV can be used within the Processing environment to allow a greater level of camera interaction than with the standard Processing video library alone.

One of the capabilities of the OpenCV library is brightness tracking. Since this is the technology I’m going with for my project, I downloaded OpenCV and started reading up on how to implement it. After getting to grips with the basics, I started writing a piece of code to keep track of the brightest point the camera could see, and simply plot a point in the relevant positon on the screen. This would help me learn about the basic functions required to utilise brightness tracking. 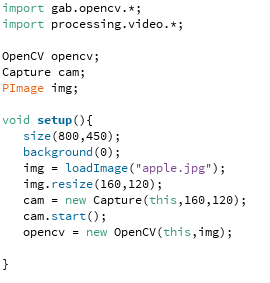 The set-up of the brightness tracking code.

As you can see from the code above, I started this by importing the necessary libraries – OpenCV and the Processing video library. I then declared variables for the OpenCV object, a capture device (the webcam on my laptop), and an image which would be used in the absence of a camera input. The setup function then sets the size and background colour of the window, before loading the fallback image and creating a new capture object. I chose a camera reoslution of just 160×120, as for the intended purpose of the sketch a high-resolution camera is not required. The image is also resized so it’s the same size as this camera input, leaving just the camera to be started and the OpenCV object to be initialised. 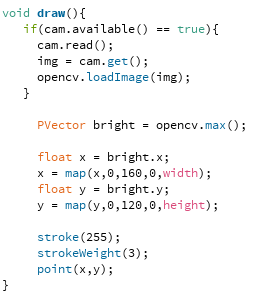 The main loop of the brightness tracking.

To actually go about finding the brightest point seen by the camera, then, I first replaced the image with the output of the camera. Then, using OpenCV’s inbuilt max() method, I was able to set a vector variable as the coordinates of the point in the image with the brightest colour value. To complete this test sketch I simply took this point, mapped it to the size of the canvas, and drew a white dot at the resultant location. 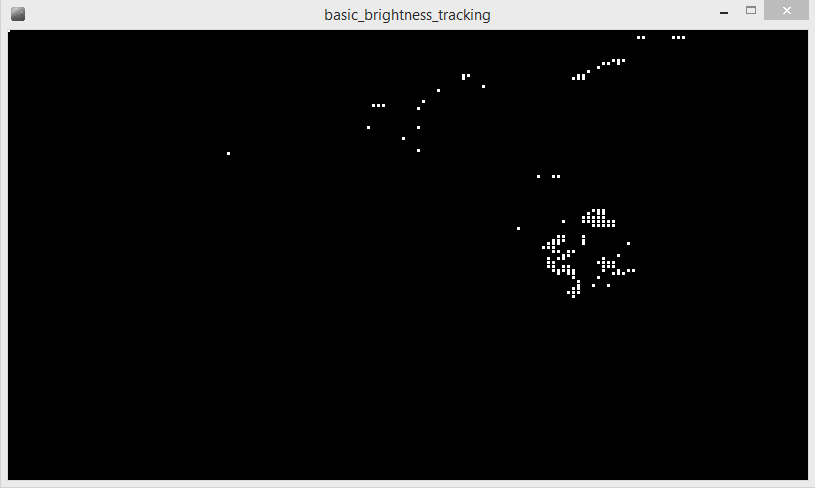 The result of the brightness tracking.

The result was, as I’d expected, a black canvas with white dots being regularly drawn at the location on the brightest point. However, since the point was simply the brightest in view of the camera all the time, the dots were basically being drawn around light sources and other bright objects nearby. In order to use this technique for my actual project I will need to somehow constrain the program so that the point is only drawn to the screen when I want it to be, i.e when a light is specifically being shone to activate the drawing of an image. I think this first test helped me get to grips with OpenCV and some of its capabilities, and I will continue to test methods of achieving my goals within the project.

Processing Project – Ramping Up the Complexity